Email Sending Times: What Is the Best Time to Send Your Email?

Nailing the perfect sending time will make it much more likely for your subscribers to actually open and read your emails. If you want to make a big email marketing impact, knowing when to send your messages is crucial.

So, what are the best email sending times? I have some advice I want to share, so read on.

What Are The Current General Guidelines on Sending Emails?

There are some general guidelines, accepted by most email marketers, that we can use as a means for best sending times orientation.

That doesn’t mean, however, that they’ll work for absolutely everybody. But we’ll get to that later on.

Now, first, let’s take a look at what are considered to be some of the best email sending times out there:

However, folks, these are very general rules. The more specific situation around best email sending times says that it actually depends on your audience.

And that’s why segmentation matters so much. The real truth is that there isn’t only one particular window of time when it’s best to send emails. Sure, some are better than others, but all in all, it really mostly depends on the habits and activities of your particular users and the ways you’ve segmented your email lists. Every list consists of different types of people, with their own habits and desires, with lots of different criteria that brought them there.

Let’s take a look at a few studies that’ll help us make things a bit clearer when it comes to the best email sending times.

What Are the Best Email Sending Times?

GetResponse, an email marketing platform, did a study where they analyzed approximately 4 billion emails (yes, that’s right), sent between the months of January and June, 2019. They wanted to find out the precise topic of today’s article - what is the best time to send emails to individual customers, based on their local times.

The study included active senders who had a contact list of minimum 1000 contacts. What they discovered was pretty interesting indeed. Can you look at the graphs in the image below and figure it out before I go on explaining?

Did you notice? There actually isn’t that big of a difference between Monday to Friday. Weekends, obviously, aren’t the best time to send emails, according to GetReponse’s study, with only a slight difference on Sunday, making it a better choice for sending emails than Saturday - that is, if you really must.

From the data gathered in the study, we do see that Tuesday actually has the highest open rates, as well as the highest click-through rates from all other days. That basically makes it the most popular day for sending email marketing content. The weekends were least popular, and they also had the lowest opening rates.

Is the Weekend Really Doomed When It Comes to Email Marketing?

Well, that’s a good question, and the answer is - surprisingly - no.

As it turns out, Saturdays are the best days for conversions and sales. Surprised much?

A Yes Marketing study conducted in the first quarter of 2017, as reported in an OptinMonster overview of the best email sending times, gives interesting data. Namely, it says that Saturdays are actually the best days for customer conversion. With the exception of Black Friday, as well as Cyber Monday, the data shows how email marketing actually brought on higher conversions during the weekend.

The highest conversion rate during the workweek was on Tuesday and Friday, with 2.5%, but on Saturday it was 3.6%. Sunday also performs rather well here, with 2.4%, compared to the least favorable days of the week when it comes to conversions, which are Wednesday (1.8%) and Thursday (1.9%).

Another interesting piece of data from the same study was the fact that Friday had the biggest percentage when it came to customer engagement - 10.8%, the lowest being on Saturday and Tuesday, with 7.5% and 7.6%, respectively.

So what does this tell us? Well, it tells us that people engage (opening the email, clicking the inside links, browsing the pages) most thoroughly with content, products, or services they’re interested in on Fridays, and they decide to buy them the next day - on Saturdays.

And this gives you a good indication of how you can best nurture that engagement-customer conversion duo, and try to send your best work, the best email content you have on those days.

And then there’s a report from Omnisend, which says that Thursday is actually the best day of the week if you want to send promotional emails. Tuesday comes in second place.

How Can We Make Sense of All This Available Data?

Well, as I mentioned earlier, there isn’t really one easy answer to the question of when is the best time for sending email marketing content.

The day that features most often in these statistics is Tuesday, so if you want a real average answer, I’d say Tuesday, a little bit after lunch, around 1 pm, possibly even 2 pm.

And yes, in general, open and click rates are pretty consistent throughout the week. They usually decline as the week comes to an end, and the weekend is considered as the worst time to send emails. But then again, we saw that the highest conversion rates happen on Saturdays!

But that’s all very general folks. And there’s a reason why nobody has agreed to what the best email sending time is. That’s because it depends, in large part, on your email list. There are some email lists that just end up behaving differently than others.

So, do some research into your own email lists. You might find out that the best times for you do not coincide with the generally accepted ones.

How Can You Find Out the Best Email Sending Times for Your Business?

Even though a lot of the statistics presented here are pretty general, as I stressed a couple of times already, they’re nevertheless a good starting point for your email marketing strategy. 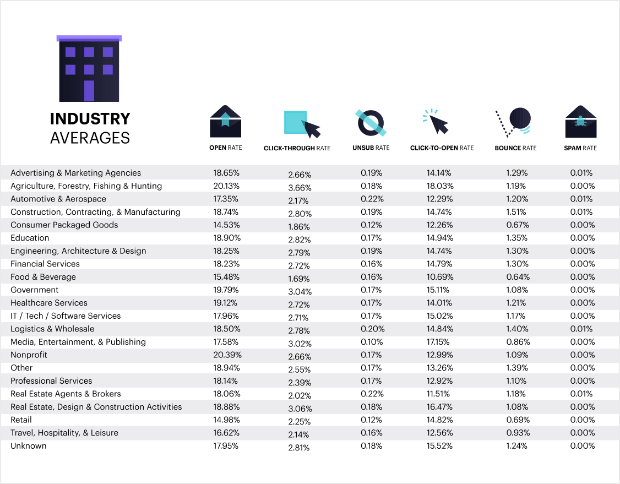 What does the data say? Do you see a room for improvement of your open rates? Okay, good, then go for it, and start to test other days and sending times and see which ones suit your segment lists and your business best, depending on the goal you’re trying to reach.

For example, say your goal is to improve sales. Then you should focus more on your email conversion rates and try to see when is the best time to make the most sales. But, if you want to focus on engagement rates, then you should look for a different time. Remember, they’re usually different, and you can’t conflate them all at the same time.

Another thing you need to remember is to always test these different goals and rates one at a time. And don’t forget to use the same email, with the exact same subject line and body when you test the sending times in order to have a clear picture about it, and not end up “blaming it” on the body of the text, or the subject line itself.

How Can You Make the Best Choice When It Comes to Which Sending Times to Test?

Sure, there are plenty of sending times, so how can you make a hierarchy of which are best to try out first?

The short answer is - by knowing your audience and properly segmenting your email lists.

Take good care of your email content and think about its impression on your customers. What will they think of it? Will it be relevant enough, timely enough?

I’m saying this because there are so many different types of business. For example, if you have a business or provide services that people are likely to pick up after they finish their regular day jobs, then it’s actually not a bad idea to send relevant emails to your subscribers after work hours - say, in the evenings, or during the weekend when they’ll have more time to actually devote themselves to it.

But, if you have a business that helps people to optimize the traffic on their site, then it’s definitely a better idea to have them send the emails during the work week, and during work hours, when the subscribers are actually more likely to be working on their sites.

Basically, the main thing is to find out when exactly your subscribers are the likeliest to engage with your work, your products, your services, your brand.

As we saw from this article, there isn’t a right time for sending emails. Rather, there are plenty of email sending times that’ll work just as well. It all depends on the line of work you’re in, and on the habits and activities of your subscribers, as well as how well you actually know them.

The important thing to remember is to experiment with sending times a bit. However, don’t experiment without some guidance first, because otherwise, you’ll just be wasting your time. Look at the studies I provided here, and do some of your own research as well. Get to know your subscribers better, use the tools you have at your disposal to get to know their habits online, as well as their daily schedule. Only then will you be able to know which email sending times you can start to experiment with.

Use A/B testing to test when your users are most active - send your emails then, and you can start seeing your goal slowly crystalizing in front of you, getting nearer and nearer.

That being said, I hope this article helped you out in finding the best possible email sending times.